Companies around the world have by and large bought into the benefits of Big Data. They are collecting and keeping more data than ever before, but most of the time all that Big Data is not earning its keep.

Business users are looking for concise reports or summaries of the data. Solution developers don’t have the expertise or domain knowledge to coherently present the raw data being collected on their own. Analysts aren’t able to help because the data they need is stored in disparate systems without a central catalog. The right data exists, but because it can’t be synthesized and presented to decision makers in a timely fashion it never makes an impact on real business problems.

Before we can develop a big data workflow we must first understand the different groups that play a critical role in the data ecosystem. People usually think only in terms of producers and consumers, but in reality their are four important groups that must be considered. 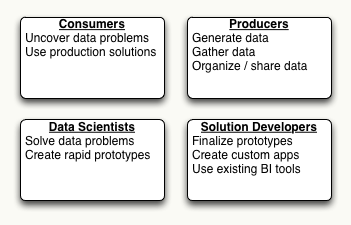 Consumers or business users have problems that need to be solved. They have a keen understanding of the issues facing their business unit, but usually don’t have the time or technical expertise to analyze raw data. They can be represented by any area of the business, from marketing to sales to research and development.

These users should be leveraged in two key ways:

The producers bring data into the organization. They could be a business unit that is actively generating data, such as website traffic logs, or gathering data from third parties, such as Twitter or Facebook. In some cases Consumers can also be Producers. For example, a marketing group interested in sentiment analysis may bring a Twitter data stream into the organization, but they usually wont have the ability to perform the sentiment analysis themselves.

A key mistake that producers often make is to inadvertently silo the data they bring into the organization so it can’t be leveraged by other groups. To prevent this problem, producers should be enabled in the following ways:

Data Scientists are capable of taking raw data and using it to solve given business problems. The most common mistake that organizations make with their Data Science teams is to give them access to raw data and ask them to do something interesting with it. This almost always leads to long projects with results that can’t actually be used by the business. They should always be approached with problems that need to be solved.

The following are the keys to effectively utilizing a Data Science team:

Armed with knowledge of the business problem and the output from the Data Science team, Solution Developers build applications or automated processes that can be used directly by the Consumers. These could be as simple as automated reports built with an out of the box BI tool, or as complex as a custom built, customer facing application. The right choice will depend on the intended audience of the solution.

The following flowchart outlines a generic workflow that leads from a real business problem to a production application that business users can derive value from. Note that all the stakeholders defined above are completely orthogonal. 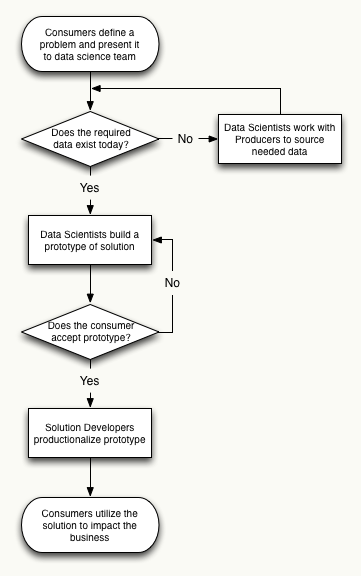 The following scenario illustrates how the above workflow could be put into practice:

Organizations can increase the value of the Big Data they are already storing by clearly defining the roles and responsibilities of the key data stakeholders. Workflows can be established that allow each group to be as orthogonal as possible in order to maximize efficiency and business value.